Back to the Future: By Maserati Spyder to Sebring 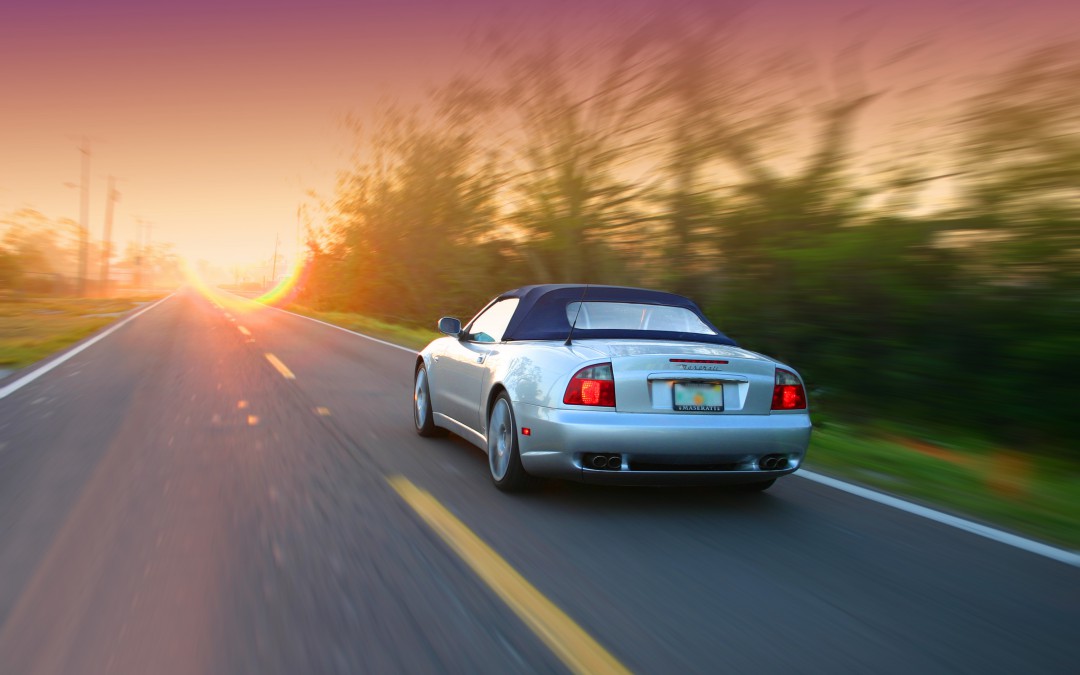 This is the feature “Cars” story from the first ever issue of Maserati Monthly, produced by Intelliga Communications for Maserati North America. Story by Adam Fox, photos by Mark Davidson. First published April 2005.

It was an offer I couldn’t refuse. The last time Maserati raced at Sebring in 1957, Fangio and Behra won the race in a 450S. The factory is returning this year with an MC12; they will have a 450S in the paddock as well. Do you want to take a Spyder and go see the race?

Days later I was pressing the button to drop the power roof of a silver 2002 Maserati Spyder Cambiocorsa, looking forward to seeing Maserati’s return to American racing and enjoying the car with which the marque returned to American roads. 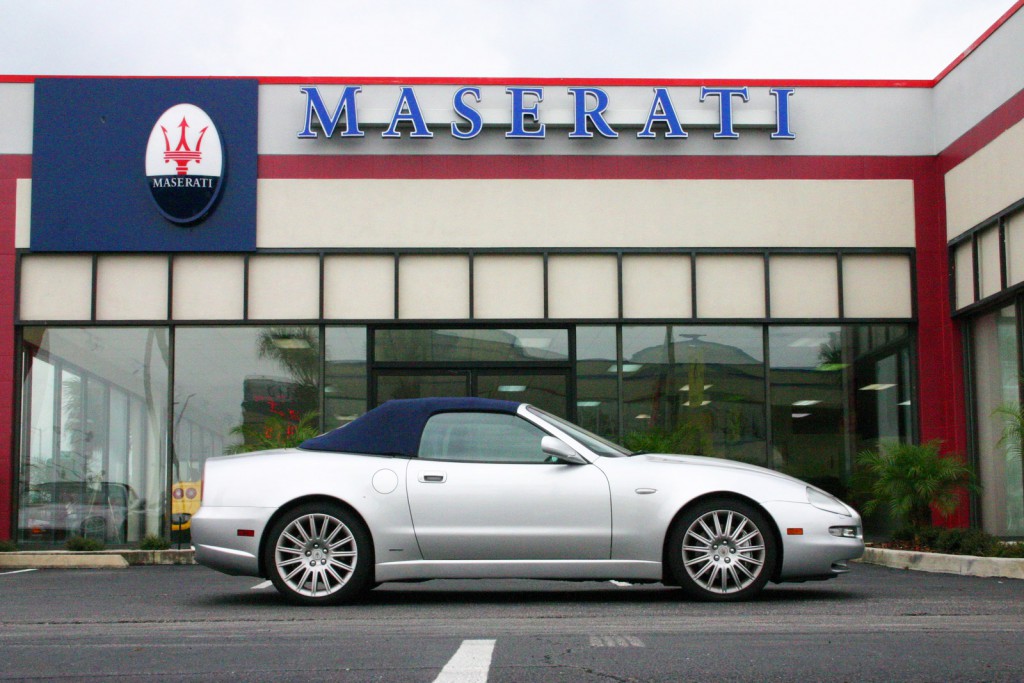 The Giugiaro-styled Spyder, with its distinctively beautiful shape and class-leading 390bhp, 4.2 liter normally aspirated V8 engine, is a pure sports car in the modern idiom. Luxury abounds, the styling is classically understated, but its spirit is closely connected with both the legendary 450S and the fabulous MC12. 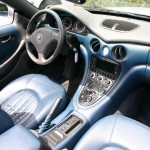 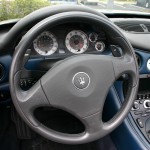 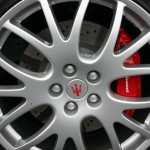 The one I drove was a lesson in the quality and reliability of current Maseratis. A demonstrator for Maserati of Central Florida, it has been driven hard almost every day for the past three years and accumulated 12,200 miles requiring only standard maintenance before I was handed the keys. I put on almost 600 more miles before regretfully giving it back to General Manager Dean Markley. In the meantime I reveled in al fresco motoring with the evocative scent of orange blossoms wafting from Florida’s great orchards. 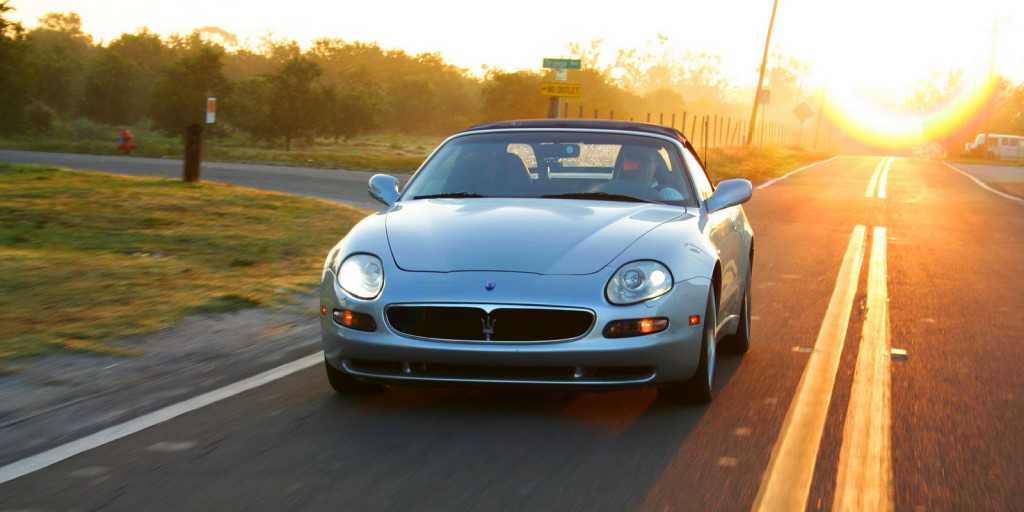 The Spyder is perfectly happy on the long, straight Florida roads… even if those who enjoy driving are not.

On long, generally straight Central Florida roads nothing compares to the joy of burying the throttle to feel the full effect of an ultra-modern alloy V8. Burbling happily at idle, the engine thrums at cruising speeds, and crackles its authority approaching redline, a heady 7,600rpm. The variable valve timing V8 further recalls its predecessors with a prodigious 330 ft-lbs of peak torque at 4,500rpm, a specific output of 92bhp/liter, and a smooth willingness to rev that was lacking on the track in 1957! 0-60mph in less than 5 seconds means the Spyder can beat the 450S in a drag race, and at 176mph it’s a close match for top speed. 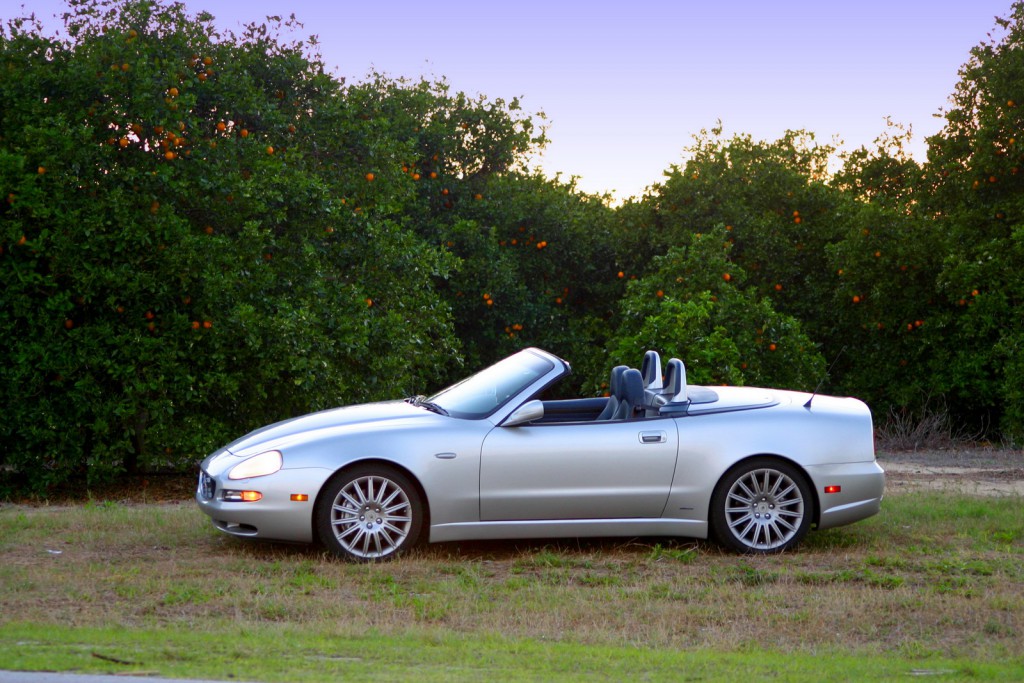 Florida and an orange grove… seemed logical to us!

The well proportioned, electrically adjustable seats hold occupants comfortably at one with the Spyder at any pace. The 450S was a purpose-built racing roadster but Maserati packaged the modern Spyder with great civility and an elegant, easy-to-use roof that I raised a few times to seal out rain, sadly hiding the integrated roll hoops. The 2005 90th Anniversary Spyder, available now from Maserati dealers, enhances them with aerodynamic carbon fiber fairings reminiscent of Maserati’s great sports racers.

Flicking the wheel to negotiate occasional S-bends or carving through traffic in a Maserati Spyder is a wonderfully visceral exercise as the suspension loads and the car reacts with equanimity to every input. In common with the MC12, “my” Spyder had both Skyhook adaptive suspension and the Cambiocorsa paddle-shift manual transmission. The systems interact to help give superb driver control. 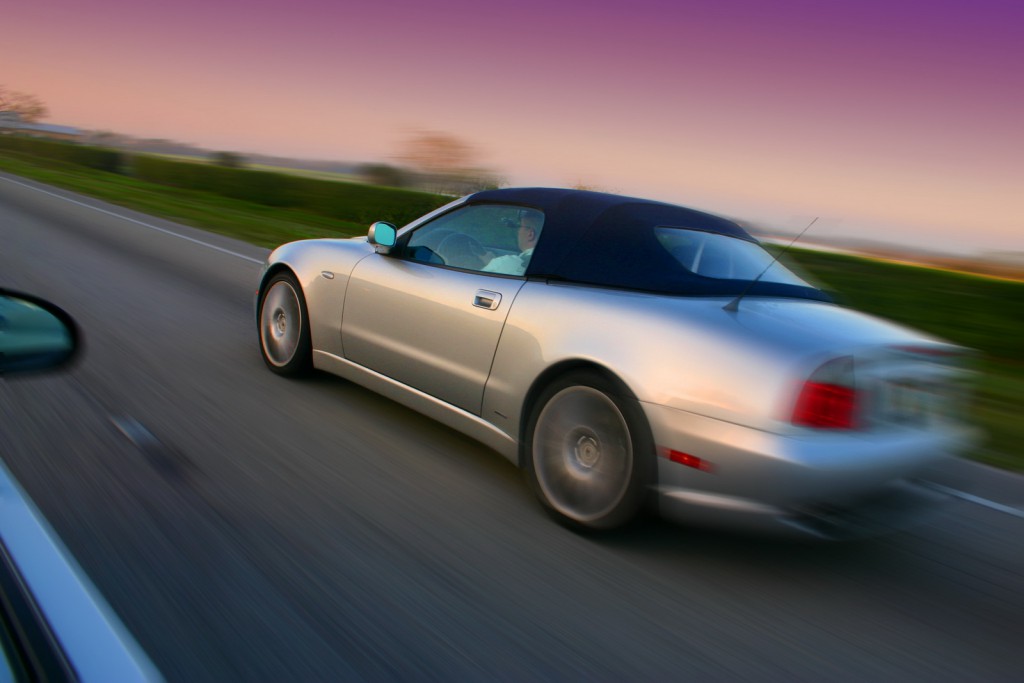 The Maserati Spyder was, ultimately, a joy to drive. 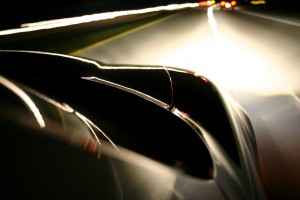 Skyhook unobtrusively helps to hold the road during spirited driving, allowing superb cornering without ride harshness. The Spyder’s composure was difficult to upset, and the user-switchable integrated traction control gave me great freedom before interceding. Newer Maseratis are enhanced by the transparent but effective Maserati Stability Program. Unlike many other cars’, the Spyder’s power steering is wonderfully direct and accurate, with no overboosting. On-ramps and occasional off-camber curves showed the road dynamics to be superb – suitable not only for smooth race tracks, but entirely usable by drivers of every skill level on the average freeway or state highway.

Cambiocorsa takes control of the clutch for seamless shifts at the driver’s bidding. Tap the right paddle for upshift and a controlled surge forward. Tap the left paddle and Cambiocorsa blips the throttle to execute a delicious downshift of matched revs. I find myself shifting just for the fun of it, to enjoy that wonderful soundtrack, to thrill in the speed and simplicity, and occasionally to pass slower traffic. With the top down this Spyder traverses 80-100mph in about 8 seconds in 6th gear. In only 5 seconds I can downshift from 6th to 4th, accelerate from 80-100mph, and upshift from 4th to 6th in this well worn-in car. The 90th Anniversary Spyder and GranSport currently available from Maserati are even more refined. 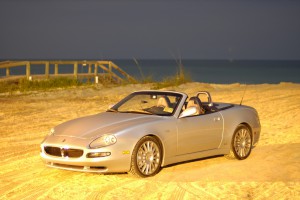 2002 Maserati Spyder on the brilliant, fine Florida sand with an Atlantic Ocean backdrop.

During a side trip to Florida’s Atlantic coast, loping along with the top down and some classic jazz playing on the stereo, I reflect upon just how right Maserati got this car. Fit and finish are excellent. Warm leather throughout the interior, and even on the stylish roll-bars’ fascias, is one of those brilliant details for which Maserati is rightly famous. The cabin has been designed to heighten enjoyment, an oasis of calm in the air displaced by a speedy roadster. When evenings turned colder it was unnecessary to raise the roof as the climate system easily provided an envelope of comfort.

The cabin has been designed to heighten enjoyment, an oasis of calm in the air displaced by a speedy roadster. When evenings turned colder it was unnecessary to raise the roof as the climate system easily provided an envelope of comfort. 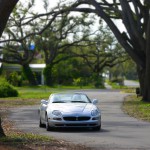 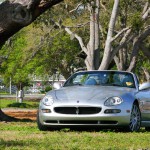 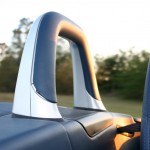 Crossing the bridge into the beach town of Melbourne, numerous sports car drivers crane their necks to have a better look, many express approval of the car. When it’s parked a small but respectful crowd appears and a few cell phone cameras pop out to snap pictures. “People get some cars to show off” says one admirer “but a Maserati says you know and love cars. It’s what I dream of having.”

At Sebring the 2002 Spyder comes face to face with the great 450S and the MC12 as the latter prepares to take up the gauntlet. Racing has changed in 48 years, but Maserati’s outlook has not. The Risi Competizione crew is professional, methodical, and dedicated. They exactly reflect the values of those who design and build Maseratis in Modena. Pulling into the paddock, the car’s subdued form and implicit muscle are immediately appreciated. Italian design has that effect and everyone loves a Maserati. 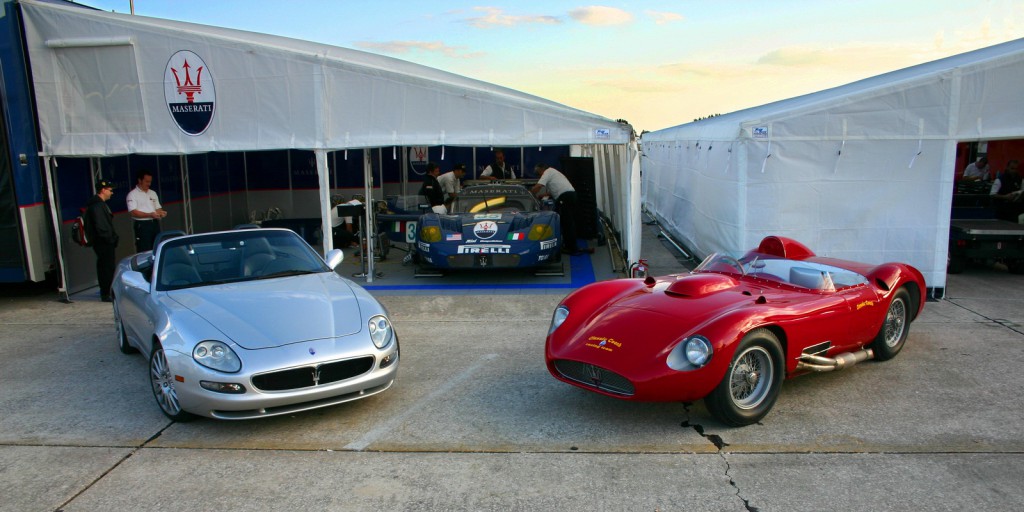 In good company. In fact, could there be better company?! 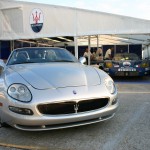 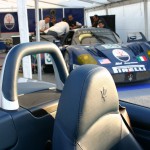 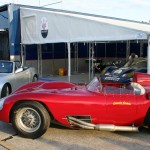 Great attention is paid to this “demo” in a paddock of exotic and beautiful racing machines. Sports car fans and enthusiasts don’t forget. They know what the Spyder is and respond to it: 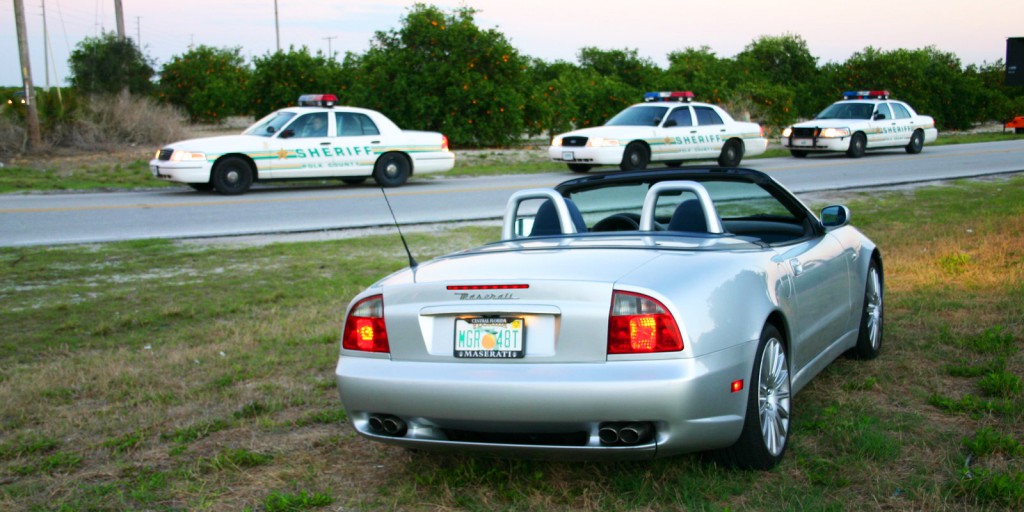 Attracting attention that was, this time, not unwelcome.

One Sherrif’s deputy leans from his cruiser to ask about the Spyder and listen approvingly to its exhaust note. Of course, there is the inevitable intonation of Joe Walsh’s 70’s musical homage in Life’s Been Good: “My Maserati does 185…” Perhaps better to forget the next line with so many members of Florida’s law enforcement community around! Asked if this Maserati is mine I lament that it is not, but I’d be glad if it was.

Later, to the adulation of the crowd, Maserati returned to American racing with the factory-run MC12. Its pit was just below the banner and tricolore proclaiming Maserati’s 1957 win. After a promising start in 2005 the MC12 eventually took fifth place in class at the grueling 12 Hour race, a fine result. Expect the car and the team to become stronger throughout the 2005 American Le Mans Series season. Maserati road cars have been refined and improved every year since 2002 when the marque returned and the results are fantastic. The 2002 Spyder shows just what a great product it was to begin with. 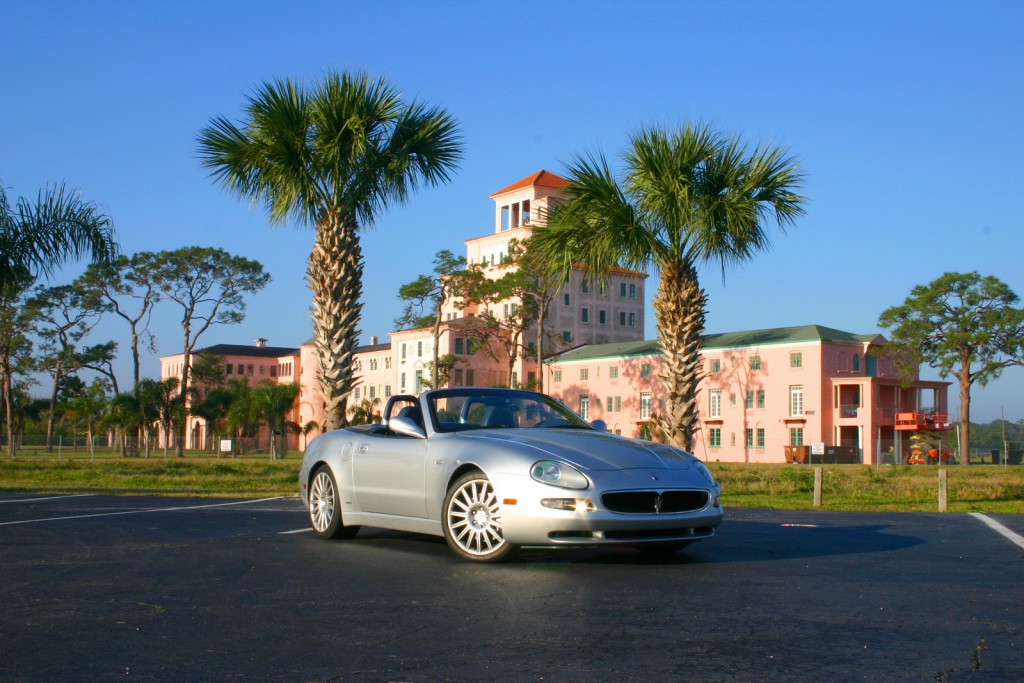