This is the second feature story from the first ever issue of Maserati Monthly, produced by Intelliga Communications for Maserati North America. Story by Adam Fox, colour photos by Mark Davidson. First published April 2005. 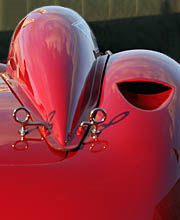 The long wait has been rewarded. The Maserati MC12, the stunning car that is the pinnacle of the Maserati range, made its race debut back in September, in Italy. North America had to wait until March, when the MC12 competed in the Twelve Hours of Sebring – a debut that echoed a similar happening almost fifty years earlier.

Back in 1957 Sebring saw the first appearance in North America of the superb 450S, one of the most powerful front-engined sports racing cars of all time. The beautifully curvaceous chassis housed a mighty 4.5-litre V8 engine. The motor pushed the technology envelope of the time; with double overhead cams and twin-plug heads, it pushed out a massive 400bhp, a figure only surpassed in a front-engine sports car in the late 1990s.

What’s more, Maserati had recruited the best to handle all that power. At Sebring the 450S took victory with Juan Manuel Fangio and Jean Behra at the wheel, two laps ahead of the Maserati 300S of Stirling Moss and Harry Schell.

The 450S completely dominated the race; it had established a two-lap lead after only three hours, smashing the lap record in the process, and Fangio and Behra then paced themselves to the finish in the blisteringly hot conditions.

Is there any relevance in comparing the 450S to the MC12 of today? Well, the parallels are there, looking past the radically different technology. Here’s one example: The 450S, including that earth-shaking engine, was the forerunner of the 5000GT, arguably the world’s best sports car of its day and the first supercar.

Every one of the 34 5000GTs was custom made and all were the zenith of performance and luxury when new. Examples of these rare machines now change hands for over a quarter of a million dollars at auction. The MC12 has also been designed to be one of the world’s best Grand Tourers, limited to a production run of 25 for the street, spawning the racing version along the way.

The same values can be seen in both racing campaigns, too; the passion for motorsport which drives Maserati, the desire to not just build the best high performance cars in the world but to demonstrate their excellence in the most demanding events. It’s not just a PR exercise, either. The company truly believes that racing can, and does, improve the breed.

The MC12 has already proved its worth in the FIA GT Championship, where it competed in the last four races of the 2004 season in Europe, the Middle East and China. The results speak for themselves: two victories, two second places and a third, culminating in a 1-2 finish in the season finale in China. But how does such a fabulous car relate to the rest of the Maserati range? 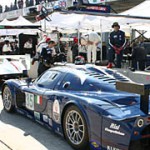 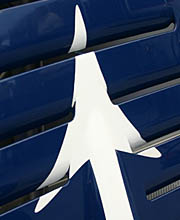 Styling is a good place to start. The shape of the MC12 was inspired by Giugiaro, who also styled the Spyder. The swooping curves remind you of the GranSport and Coupe. The Cambiocorsa transmission found in the MC12 is closely related to that found in all other Maserati road cars, though it is of course geared differently. And Cambiocorsa brings to mind something else the MC12 has in common with the rest of the range: the emphasis on the driver. Like all Maseratis it has been built to be relaxing and easy to drive, yet offer a wonderfully involving driving experience – the main difference being that rather fewer will be lucky enough to experience the MC12!

The MC12 will be competing in the American Le Mans Series this year, which will bring it to tracks across the United States and Canada; it will also be racing in the FIA GT Championship, racing on such fabled circuits as Monza, Silverstone and Spa as well as taking in exotic locations – Istanbul, China, Dubai and Bahrain.